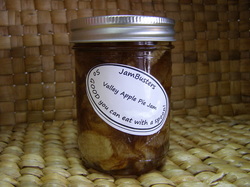 If you were to have grandma make one of her old-fashioned apple pies and scooped out all the filling once it cooled and put it into a jar it would look a lot like the Valley Apple Pie Jam created by JamBusters! The main ingredient is the apples that come from Keremeos in the Similkameen Valley of British Columbia. There's a number of spices and seasonings added to that to produce a jam that will flip your concept of apple pie filling upside down. The way in which the apples are sliced, thin but lengthways, will make putting this on toast fun and surprising like eating apple pie for breakfast. Even Grandma will go crust-less after her first taste. We aren't exaggerating when we say this jam tastes exactly like you just scooped it out of that freshly baked apple pie cooling on the cupboard. If apple pies give you warm fuzzy feelings, you can bring those back with our very special Valley Apple Pie Jam. 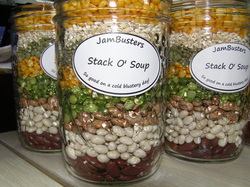 What happens when dried pinto, kidney and navy beans all end up in the same jar as yellow and green split peas, some lentils and a combination of special seasonings? You get the most incredible fibre filled soup ever made on the planet. All you need to do is boil some water, spill these jars into that water and watch the magic take place right before your eyes. We weren't kidding when we said this soup was loaded with fibre. The JamBusters! Stack O' Soup is another one of the dried soup products we've produced and due to the high fibre content in this mixture it has become a popular choice for many who want to start a pot of soup and have enough for the next few days. One jar of Stack O' Soup will produce multiple servings of this hearty bean-based soup. We've even concentrated hard on the stacking part making them look pretty as well as functional with layers of fun you can turn into soup. 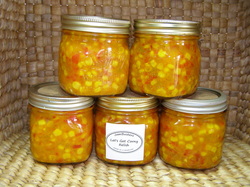 The Similkameen Valley of British Columbia provides the bulk of the ingredients for this extremely popular JamBusters! item. We called it Let's Get Corny Relish because it's mostly corn, but that's not all. Red and Orange Bell peppers provide additional colour to offset the flood of yellow produced by the corn. The peppers are also chopped into chunks the size of the corn kernels which gives this relish an interesting texture. Additional spices add to the flavour which tastes like a mixture of corn and pickles without the pickles. Let's Get Corny Relish was inspired by a childhood comfort food and lives on in our new and improved variation on the theme. This product has been used in place of your typical condiments in a variety of different dishes, is great on the side and performs extremely well when enjoyed straight from the jar on a spoon. In fact, that's our favourite way of enjoying this tasty relish. 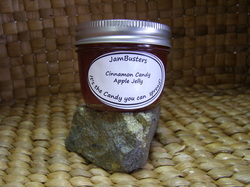 When you first look at this in a jar you can't help but notice the translucent colour of the jelly. The strong hint of red gives it the appearance of a glaze but it is much more than that. Our Cinnamon Candy Apple Jelly is made mostly of seasonal apples grown in the Keremeos portion of British Columbia's Similkameen Valley. If you thought that there could be some cinnamon candy involved, you would be right. Not only does that give this jelly the red hue, it gives it a snappy bite which enhances the flavour. We dare you to just try a bit of it on your morning slice of toast and see if you can resist repeating that...over and over. What makes this jelly stand out is that it fits into any place you would normally use a jelly. That's right, if you don't use jelly for breakfast but prefer to slather it on ham or any other kind of meat the JamBusters! Cinnamon Candy Apple Jelly will take the place of your favourite condiment from the first taste.
JamBusters